"Cancer wasn't meant to happen to us" 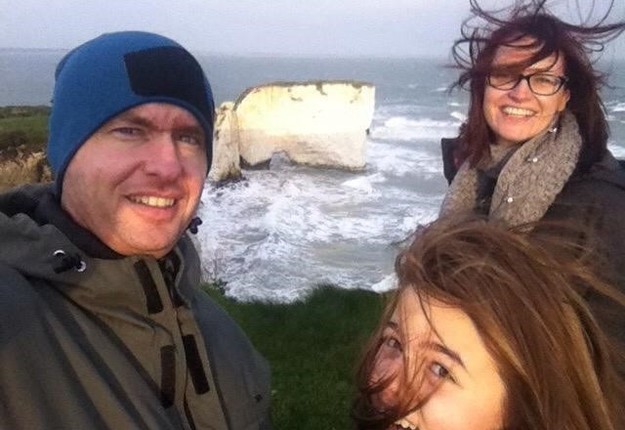 In 2014, I was working as a chartered valuation surveyor and enjoying life as a 38-year-old happily married man with a 10-year-old daughter, still playing football, running and socialising. I was busy, feeling stressed and anxious in work, but just about coping.

One morning, getting ready for another day of surveying, I noticed a small lump on the side of my neck. Nothing to worry about, I told myself - glands get inflamed and come and go, don’t they?

That evening my mother in-law and sister in-law (both nurses) were looking after my daughter and I asked them to take a look. They both said it could be a multitude of things - probably nothing, but best to get it checked out.

Fortunately, I managed to get a cancellation at the GP and I was able to be seen very quickly. I was relieved when he said it wasn’t really a concern and most likely to be an infection that had caused some glands to inflame. When it was still there after a couple of weeks it was decided that further tests should be undertaken, just as a precaution.

I then got an appointment through to see the consultant - still oblivious to the news that was about to be delivered.

I was the last to be seen in that clinic and, while I was waiting, remember thinking, ‘Just tell me what tablets I need to take and how long it’ll be till this gland goes back to normal,’ as I had some valuations to sign off that day. I didn’t see what was coming, but my wife did, as in the room it wasn’t just the consultant but a student nurse and a specialist nurse, Kim.

I remember sitting in front of the consultant as he opened my file, read a few notes and then said: “It looks like you have cancer”.

For a second it was like everything stopped but I felt my heart racing and when my wife, Helen, held my hand I just started to cry and said “sorry” to the student nurse, as I didn’t want her to be upset.

I don’t remember much else apart from asking what my chances were. The one thing I really remember with clarity is Kim saying “you won’t die from this” and that was all I needed to hear.

The next hurdle was telling my friends, family and work. I think this was hard as I didn’t want people to worry and telling the story was upsetting every time.

Most difficult, however, was telling our daughter - something that my wife and I did together soon after we had understood what the next few days and months would look like.

"It just wasn't meant to happen to us"

Cancer just wasn’t meant to happen to us… how were we supposed to tell our 10-year-old when we weren’t ready to accept this ourselves? We took advice on how best to tell her as we knew it would change her little world forever.

The treatment plan was clear: the cancer was a tumour in my throat and the lump in the gland was a secondary. The cancer was a result of a mutation of the HPV virus, probably caused by the anxiety as I was feeling low in the weeks leading up to the lump appearing.

I was lucky as cancer research has now advanced and HPV related cancers react well to radio and chemotherapy (previously, disfiguring surgery would have been required). I would need a feeding PEG inserted into my stomach as the intensive treatment would damage my throat and make normal feeding impossible. Thereafter it was a matter of trusting the process, taking the meds and anti-sickness tablets, and resting.

The first three or four weeks of treatment weren’t too bad, the NHS staff were brilliant and although the morning routine of mouth washes and tablets wasn’t overly pleasant, I was still active and eating what I wanted - the more fattening food and drink the better as weight loss was inevitable (bonus!)

Then, over the space of one weekend, the reality hit as food didn’t taste like it should, and swallowing became a little harder. Not being able to eat a meal was undoubtably the lowest point and eventually I had to admit that I needed to feed via the PEG.

My wife took charge - doing everything at home, speaking to friends and family about how things were going, making sure our daughter was having a normal routine and supporting me. I never knew when she was feeling low; she kept this from me as we just wanted to be positive.

This was the main support I needed and, during the long hours once a week having chemo, I found that some friends really came to the fore too. It’s true that some other friends found it hard to comprehend or know what to say, and I understand that.

I also found social media was an escape as well as reading about the experience of others who had managed to get through it. Helen and I disliked the term ‘beating it’ as nobody sets out to let cancer win, but we did everything to give myself the best chance.

Advances in treatment now mean that a cancer diagnosis isn’t necessarily the life ending news it once was. However, every cancer patient will tell you that diagnosis is life changing. I’m certain that the experience has changed me: the anxiety I was feeling before my diagnosis hasn’t come to the fore since, I value the good things life has to offer and try to keep in reasonable shape.

A few friends helped me, about eight months after treatment, to run a 10k race to raise money for the local hospital. I even managed to run the fastest time of my life and raised over £1,500 for equipment to help others. This was the distraction I needed during my recovery and gave me focus.

On a professional basis my employer at the time could not have done any more for me. During my recovery, and in order to give me some structure, I worked from home, checking reports, looking at negligence claims, and this is something I found I loved to do. Soon after I gained two internal promotions.

The experience made me really understand that everyone needs support. I got involved with LionHeart and encouraged my employer at the time, Countrywide, to become a partner firm. This link is a strong one and I know they are making a difference to lots of surveyors, so I’m proud to be making a small contribution too.

After routine checks for the last five years, I’ve just had confirmation that my treatment is considered curative and my risk levels are back to that of ‘normal’ people.

I’m hoping that I can help to support others with a similar diagnosis to help them along the way and show them that life can move on after having cancer.

Steve Lees MRICS is a LionHeart ambassador, working with us to raise awareness of mental health, wellbeing and cancer. He now works as a senior surveying quality manager for e.surv Chartered Surveyors. He is pictured above post treatment with his wife and daughter.

2021
September
16th - How families feel youth mental health
June
24th - 6 top tips if you’ve been referred
May
20th - Coaching for change
12th - “I’d hit absolute bottom – but it was the catalyst to seek help”
April
22nd - Spring into action by fundraising for LionHeart
March
4th - Reflecting on university mental health
February
15th - My experiences of counselling
January
20th - Worry Time - and how it helps
18th - My furlough & redundancy journey
13th - Volunteering and LionHeart
2020
November
30th - A road to change
2nd - Trusteeship through lockdown and uncertainty
October
12th - The importance of legacies
10th - Overwhelm - and overcoming it
8th - Lockdown and my mental health
September
28th - Creativity at Work
July
20th - Video
June
24th - 'If I can do it, so can you'
22nd - How to ace your APC interview online
8th - Help! I've been referred... what now?
3rd - Your coronavirus concerns, and how we're helping
May
12th - How coronavirus might be affecting your mental health
12th - Managing health anxiety through Covid-19 - and how we helped Mike
March
31st - Rising to the coronavirus challenge
24th - Keep connecting - in a different way
13th - Demonstrating our impact
February
4th - The Big C and grabbing life
4th - "Cancer wasn't meant to happen to us"
January
30th - My journey as a charity trustee
7th - Top 10 tips for CVs and interviews
2019
December
9th - Grief and loss at Christmas
November
7th - Charity trusteeship
6th - How counselling can help manage stress
October
9th - Living with anxiety and depression
July
10th - How coaching can help
May
16th - Changing attitudes to mental health
15th - The vicious circle of body image & mental health
14th - Social Anxiety & how we can help
April
11th - Life with Parkinson's
March
29th - The one about the Bipolar surveyor...
29th - What is Bipolar?
12th - Memory tips from the training front line
January
22nd - Losing a parent
8th - Frequently asked questions about LionHeart
2018
December
7th - LionHeart's support was a game-changer when I failed APC
August
16th - When the reality of motherhood doesn't quite go to plan
July
10th - The story behind surveying's Sisterhood Summit
2nd - The rollercoaster of being a first-time dad
June
22nd - My father's suicide and what I've learnt
14th - Tips for your RICS APC final assessment interview
7th - Trust in the charity sector
May
21st - Is it really okay to not be okay?
April
17th - Building resilience through your APC
January
8th - 7 ways to get more active this year
2017
December
4th - Coping with loss and grief at Christmas
October
5th - "I was told I might not be cut out to be a surveyor"
September
26th - Resilience, and why we need it
August
21st - APC Revision Top Ten Tips
July
12th - LionHeart on new fundraising code of practice
June
19th - Living with 'invisible' illness
14th - How LionHeart helped us live life
13th - Men's Health Week 2017
May
22nd - Living with panic attacks
18th - Why we must care about work life balance
11th - The chicken-and-egg of mental health and shame
February
2nd - What I learnt from Dry January
January
31st - "My 19-year journey to MRICS is what made me"
5th - Ways to be kind to yourself in 2017
2016
September
7th - Suicide prevention
August
1st - Coping with APC stress
July
13th - "I constantly watch my husband for suicidal signs"
May
26th - Dealing with referral at APC Final Assessment
19th - How mindfulness can help your relationships
18th - "I live, and thrive, with depression"
17th - Men and mental health
16th - Mental health and your relationship
April
26th - Starting out in surveying
March
11th - A happy retirement
February
1st - My Dry(ish) January
January
21st - Spring clean your finances
6th - When to consider couples counselling
2015
December
4th - Having a (financially) healthier Christmas
November
19th - Identifying and dealing with workplace bullying
18th - How to help a loved one with an addiction
June
15th - Reflections on the Lionheart Surveyors’ Football League season
12th - Carers
10th - How LionHeart can support carers
9th - Desktop Relaxation techniques
May
29th - Techniques to help combat anxiety
20th - Helping a family member with depression
18th - Achievements that make a difference
16th - Five things that may indicate your colleague needs help
11th - Helping during a panic attack

SUPPORT OUR WORK
Can you donate to help a colleague in need?