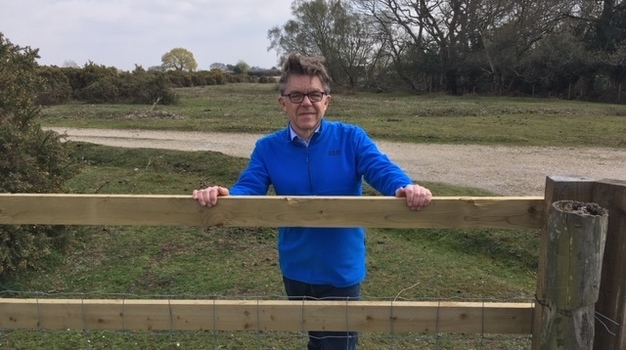 Parkinson’s is a serious and progressive neurological condition with more than 40 symptoms that affects people of all ages. Currently, there is no cure.

I’m Simon, a chartered surveyor from the south of England, and this is my story of living with Parkinson’s so far.

I was diagnosed with Parkinson’s disease in August 2015, at the age of 59, but there had been a loss of sense of smell which predated the diagnosis by some 10 to 12 years, as well as loss of facial expression and other symptoms of early onset Parkinson’s. People commented that I did not smile as much - I’d lost confidence in myself, my movement and thinking had slowed and I was taking longer to do things.

I had some 35 years’ experience of residential surveys and valuations behind me when diagnosed with Parkinson’s. I was working remotely from home for a nationwide firm of Chartered Surveyors covering mainly South East London, and finding it difficult to keep up with the changes and increasing demands of the job.

My mother had Parkinson’s along with her brother and surviving sister (three out of five siblings with the disease) and when I noticed a tremor in my left side and became aware that I was dragging my left leg whilst running I knew that it was Parkinson’s. I remember becoming anxious on the way to the hospital appointment and my wife promising everything was going to be alright and telling me I wasn’t “wasting the consultant’s time”!

"Parkinson's changes everything: who you are and how you think"

Neither of us was fully prepared for the fact that Parkinson’s changes everything. Parkinson’s is not simply a movement disorder: it affects relationships and who you are and how you think. It is also difficult adjusting to the side-effects of the medication.

For me, not being able to function as before has been the most distressing thing.

We started to plan a move out of London to improve our quality of life, and this caused further anxiety and turmoil. I had a fall from a loft ladder whilst at work and my employers had to be informed of my condition. At the same time, a family member was going through major surgery and a close friend died after a short illness.  My daughter was about to go to university and the house move became protracted, and we could not see the light at the end of the tunnel.

I was at a surveyors’ conference and someone from LionHeart came to give a talk, and I realised I needed help. I really don’t know where I would be without their help and tremendous support.

The counselling I received made such a difference to me. Just having someone to talk things through and listen helped me accept the changes and improved my thinking. LionHeart helped me cope and I will always be thankful that I made the call.

We’ve since moved to a small village where we have connections. I’ve stopped working and my life changed overnight - it is as though I jumped and the parachute opened as intended.

I’ve learnt a lot about myself and try hard to look for the positives of living with Parkinson’s. I have a lot to be grateful for, not least the love and support of my wife, family and friends.

A positive side-effect of the medication is that I’ve been more creative and have new interests. I’ve become more engaged with the community and church. I’m learning to play the ukulele and have gone back to running; exercise seems to be the only way of pushing back the Parkinson’s.

I try not to think too hard about the future and pray that a cure will be found someday soon.

Simon is a retired chartered surveyor living in the south of England. He shared his story to mark World Parkinson's Day, and to remind other RICS professionals living with long-term conditions that LionHeart is here to help.

2021
June
24th - 6 top tips if you’ve been referred
May
20th - Coaching for change
12th - “I’d hit absolute bottom – but it was the catalyst to seek help”
April
22nd - Spring into action by fundraising for LionHeart
March
4th - Reflecting on university mental health
February
15th - My experiences of counselling
January
20th - Worry Time - and how it helps
18th - My furlough & redundancy journey
13th - Volunteering and LionHeart
2020
November
30th - A road to change
2nd - Trusteeship through lockdown and uncertainty
October
12th - The importance of legacies
10th - Overwhelm - and overcoming it
8th - Lockdown and my mental health
September
28th - Creativity at Work
July
20th - Video
June
24th - 'If I can do it, so can you'
22nd - How to ace your APC interview online
8th - Help! I've been referred... what now?
3rd - Your coronavirus concerns, and how we're helping
May
12th - Managing health anxiety through Covid-19 - and how we helped Mike
12th - How coronavirus might be affecting your mental health
March
31st - Rising to the coronavirus challenge
24th - Keep connecting - in a different way
13th - Demonstrating our impact
February
4th - The Big C and grabbing life
4th - "Cancer wasn't meant to happen to us"
January
30th - My journey as a charity trustee
7th - Top 10 tips for CVs and interviews
2019
December
9th - Grief and loss at Christmas
November
7th - Charity trusteeship
6th - How counselling can help manage stress
October
9th - Living with anxiety and depression
July
10th - How coaching can help
May
16th - Changing attitudes to mental health
15th - The vicious circle of body image & mental health
14th - Social Anxiety & how we can help
April
11th - Life with Parkinson's
March
29th - What is Bipolar?
29th - The one about the Bipolar surveyor...
12th - Memory tips from the training front line
January
22nd - Losing a parent
8th - Frequently asked questions about LionHeart
2018
December
7th - LionHeart's support was a game-changer when I failed APC
August
16th - When the reality of motherhood doesn't quite go to plan
July
10th - The story behind surveying's Sisterhood Summit
2nd - The rollercoaster of being a first-time dad
June
22nd - My father's suicide and what I've learnt
14th - Tips for your RICS APC final assessment interview
7th - Trust in the charity sector
May
21st - Is it really okay to not be okay?
April
17th - Building resilience through your APC
January
8th - 7 ways to get more active this year
2017
December
4th - Coping with loss and grief at Christmas
October
5th - "I was told I might not be cut out to be a surveyor"
September
26th - Resilience, and why we need it
August
21st - APC Revision Top Ten Tips
July
12th - LionHeart on new fundraising code of practice
June
19th - Living with 'invisible' illness
14th - How LionHeart helped us live life
13th - Men's Health Week 2017
May
22nd - Living with panic attacks
18th - Why we must care about work life balance
11th - The chicken-and-egg of mental health and shame
February
2nd - What I learnt from Dry January
January
31st - "My 19-year journey to MRICS is what made me"
5th - Ways to be kind to yourself in 2017
2016
September
7th - Suicide prevention
August
1st - Coping with APC stress
July
13th - "I constantly watch my husband for suicidal signs"
May
26th - Dealing with referral at APC Final Assessment
19th - How mindfulness can help your relationships
18th - "I live, and thrive, with depression"
17th - Men and mental health
16th - Mental health and your relationship
April
26th - Starting out in surveying
March
11th - A happy retirement
February
1st - My Dry(ish) January
January
21st - Spring clean your finances
6th - When to consider couples counselling
2015
December
4th - Having a (financially) healthier Christmas
November
19th - Identifying and dealing with workplace bullying
18th - How to help a loved one with an addiction
June
15th - Reflections on the Lionheart Surveyors’ Football League season
12th - Carers
10th - How LionHeart can support carers
9th - Desktop Relaxation techniques
May
29th - Techniques to help combat anxiety
20th - Helping a family member with depression
18th - Achievements that make a difference
16th - Five things that may indicate your colleague needs help
11th - Helping during a panic attack