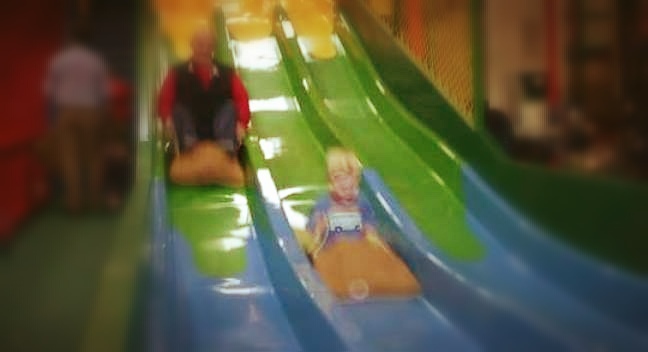 About this time last year we received the devastating news that my beloved dad was terminally ill.

It was a pretty terrible start to a new year, not that there can be any ‘good’ time to be told something like that.

If I’m honest, I had probably seen it coming. But until it was said out loud - and rather starkly - it had been easy to push the thought away, scold myself for being overly negative, and cling on to the shred of hope that he would bounce back as he had done so many times before.

So began something of a rollercoaster for me and my family, the kind that’s sadly all too familiar to many families. Facing the fact that someone you love so very dearly won’t be with you for much longer is an awful thing to come to terms with.

I struggled with the uncertainty of it all, the whens and the how longs. Would this be the last time we did X, Y or Z? Would he be here for his birthday? Father’s Day? My kids’ birthdays? I’d constantly look at my phone, checking for messages, missed calls. If it rang I would snatch it up and my heart would skip a beat if the screen said ‘Mum’. It was like living in a state of perpetual anxiety, fearing the worst.

He continued to confound the doctors, with several hospital admissions where you’d secretly wonder, ‘Is this it?’. But a few days later he’d rally, and you’d even start to question whether the medics had got it all wrong.

"One of the most painful things is preparing your children"

One of the most painful things for me was thinking about how to prepare my two sons, then aged 9 and 7, for the loss that would hit them so hard. They had a very close relationship and Dad had been an absolute and active constant in their little lives; cheering them on from the football pitch sidelines, picking them up from school regularly, teaching them to swim as he’d once taught me and my sister. I desperately didn’t want to change the time they had left with him or frighten them, but knew it would be unfair to leave them totally unprepared.

We began by telling them the doctors couldn’t make Papa’s lungs better, and he would always have to use the oxygen he’d been discharged from hospital with (littlest dubbed the portable oxygen cylinder ‘Papa’s jet pack’, which I think we all rather liked the sound of!) Kids are often very accepting of change, and they took this in their stride, along with the fact that their formerly fit and active grandfather now needed a wheelchair. Very near the end we began to have the hard conversations about people dying, but I think it still didn’t seem real.

"Even though I'd been steeling myself, it still hits like a sucker punch"

I was torn between the not wanting him to suffer, knowing it was hard for him to lose his independence, with the fact that I simply wasn’t ready to let him go.

Around seven months after we were given the news, my dad slipped away in hospital. It had been rather sudden in the end, and even though I thought I’d been steeling myself for this all along, it turned out it still hits you like a sucker punch.

Almost worse than dealing with your own emotions is watching your children grieve: for once, as a parent, there is absolutely nothing you can do or say to make it better.

What helped?
A few months on now I can reflect a little bit, even though I know it is still early in my journey of grief; things like Christmas side-swiped me back to square one, it seemed. But these are the things I have taken comfort from:

Being open about how you feel
Yeah, so I’m actually still not great with this one and still have a tendency to paste a smile on, but I’m working on it. Early on, my eldest son, then aged 10, asked me if he was “crying too much”. When I said no, there was no such thing and it was important to let it out if that’s how you felt, he said he hadn’t seen me cry very much. Turned out my instinct to protect the boys from my own grief had been the wrong one, and rather than hiding away in the bedroom or blubbing in the bubble of my car, actually crying together sometimes was better all round.

Remembering why you’re lucky
Both me and my sister only lived a short drive away and could visit regularly, even if it was just for a quick cup of tea. Visits with the kids never failed to put a smile on his face, and for this I will always be grateful: while it is hard to bear grief, and to see your children grieve, we were so very lucky to have that relationship and a lifetime of memories which do become easier to remember with a smile.

Supportive workplace
Given who we are and what we do at LionHeart, it’s probably no surprise I was surrounded by understanding. There was always a listening ear, some wise words, and the occasional tissue, which helped enormously, as did the flexibility to take time when I needed to as I tried to juggle work with being a mum and a daughter who was suddenly needed. Unfortunately, not everyone will have this kind of working environment, but it’s surprising how many people can relate to what you’re going through if you open up. Sometimes work can be a welcome slice of normality, but equally it can be a huge relief to let that professional hat wobble a bit sometimes and admit that you’re feeling very much fallible.