The rollercoaster of being a first-time dad 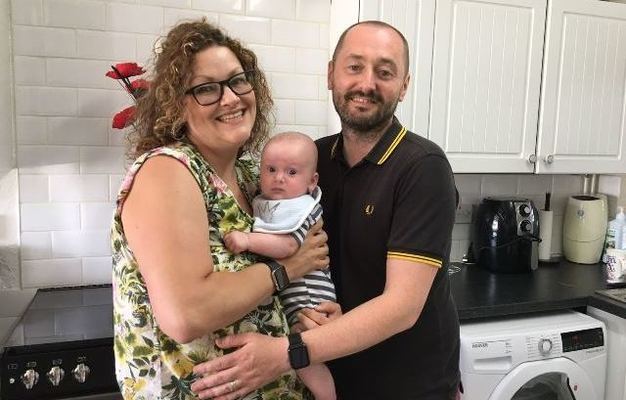 Becoming a dad was never something I thought I was really that bothered about; it was something my wife Hayley and I didn’t think we wanted.

But then we went out to dinner to celebrate our first wedding anniversary and Hayley said that she wanted to try for a baby.

At first, I was a bit shocked, but the more I thought about it the more it felt right, and the more I wanted to do it.

I remember when Hayley went to do the pregnancy test we had been trying for a while by that point, and neither of us really believed it would be positive. When it did turn out to be positive, I felt a whole lot of things all at once - I was shocked, scared, excited, proud, elated and ridiculously emotional!!

During the pregnancy, feeling scared shifted from being about becoming a father and more about making sure Hayley and my unborn baby were okay. As time went on, I felt more and more proud, and also really focused on making sure that our home was ready for the new arrival.

I’m not ashamed to say that I remained ridiculously emotional for the duration - especially whenever we went for a scan, there was something so amazing about seeing our baby there on the screen.

"Nothing prepared me for the rollercoaster of feelings"

Nothing prepared me for the rollercoaster of feelings as an expectant dad. I found myself constantly worried that everything was okay during the pregnancy, especially if there were times that Hayley couldn’t feel him moving as much (by this point we knew we were having a little boy). I was just so excited to finally meet him. I was (and still am) really excited to take him to his first football match…

When it comes to getting ready for the birth and taking paternity leave, I’d advise other dads-to-be to speak to their employer as soon as possible and find out the policies on pay and leave. For example, I was able to use my annual leave to extend the two weeks’ statutory paternity leave you can take (it was the best use of annual leave I have ever taken!) Some employers may not allow you to take this much time off in one go, but having early conversations with your boss might make it a possibility. Try and find out how flexible work can be around timings too, as there is such a big ‘window’ before and after the due date that baby can arrive.

On a practical note, it really helped me to plan for things like the best route to take to the hospital, and what the parking situation is like (parking can be notoriously bad at the hospital Thomas was born so we had a contingency plan) Planning for these different eventualities helped me feel (a little bit!) more in control.

If as a dad you are hoping to stay over at the hospital, check what their policy is. They might not let dads stay at all, and if they do they probably won’t have shower facilities or feed you.

As for the birth itself, I don’t think there is anything at all that can prepare you for it.

Seeing my wife going through such pain for so long and feeling completely powerless to relieve it is probably the hardest thing I’ve ever had to witness - but it was followed by the most beautiful thing I’ve ever seen, when he finally came out and started crying (in fact I’m welling up just remembering it!)

I think I felt as prepared as we could be for the first few days, but it was difficult when he cried and we couldn’t figure out why (PS it was always because he was hungry!!)

"Going back to work as a new dad was really hard"

I found going back to work as a new dad really hard. I knew I would miss them both, but it was also hard to know I wouldn’t be able to help out if Hayley needed me (to be fair, she never does - she’s amazing!)

It did get easier after a few weeks and I got into a routine to make sure I feel I’ve done all the little things I can to help set her up for the day - so before I leave for the day the bin has been emptied, the bottles sterilised and formula pots filled, and there’s something easy and quick for Hayley to eat.

A few months on, things are much more settled; we both have a routine and work together really well. I still feel like I’m missing spending time with them both but I’m much less worried that they’re okay now.

Now we have to turn our attention to the next big change, which is Hayley going back to work. The most obvious thing to start considering is childcare, as you will find all the best nurseries have waiting lists. Also, you might have to think about whether nursery opening and closing times can meet your usual routines or what can be done to work around it.

I’ve been very fortunate in having a supportive employer throughout this rollercoaster of a year. LionHeart has been fantastic in allowing me to work flexibly during the pregnancy, so I could go to scans and appointments, and in the early weeks of fatherhood. It would be brilliant if more employers could show this kind of flexibility for what is such a big thing in someone’s life.

I do think it would be helpful if employers had a better understanding of maternity and paternity pay. Neither of us knew what we could expect in our pay packets, which can make it tricky to plan your budgets.

Every second of the rollercoaster has been worth it and I absolutely could not imagine life without Thomas now. If there’s any bloke out there just talking about starting a family now, I’d say do it - it’s the scariest and hardest thing you’ll probably ever do but you’ll forget all that when you see them for the first time, when they grab hold of your finger, or smile and laugh at you.

And, of course, there’s always that first football match…..

Ben Halpin is a LionHeart support officer, a proud dad and football fan

2022
May
18th - Coaching to unlock a new future
12th - How to help your lonely teen
9th - Asking for help - as the helper
April
28th - Why talking about dying is so important
7th - 9 simple ways to cut stress
March
23rd - Living & succeeding with ADHD
16th - ‘I came to see how much of my life was run on adrenaline’
February
10th - "My daughter didn't want to be here any more"
4th - My life-changing cancer diagnosis
January
13th - Reassessing how you drink
4th - Looking to the future
2021
November
19th - How alcohol almost cost me everything
18th - Children's grief and how to help
16th - Alcohol, anxiety and how secrets keep you sick
4th - "I had no idea stress could cause a real physical pain"
October
22nd - 5 ways to get your teen talking
18th - The Positives of Menopause
13th - Baby loss and depression
12th - The pandemic’s impact on children's mental health (and what we can do about it)
8th - Don't judge a book - a story of depression and change
5th - LionHeart Back to Work support
September
29th - Post APC submission
16th - How families feel youth mental health
June
24th - 6 top tips if you’ve been referred
May
20th - Coaching for change
12th - “I’d hit absolute bottom – but it was the catalyst to seek help”
April
22nd - Spring into action by fundraising for LionHeart
March
4th - Reflecting on university mental health
February
15th - My experiences of counselling
January
20th - Worry Time - and how it helps
18th - My furlough & redundancy journey
13th - Volunteering and LionHeart
2020
November
30th - A road to change
2nd - Trusteeship through lockdown and uncertainty
October
12th - The importance of legacies
10th - Overwhelm - and overcoming it
8th - Lockdown and my mental health
September
28th - Creativity at Work
July
20th - Video
June
24th - 'If I can do it, so can you'
22nd - How to ace your APC interview online
8th - Help! I've been referred... what now?
3rd - Your coronavirus concerns, and how we're helping
May
12th - How coronavirus might be affecting your mental health
12th - Managing health anxiety through Covid-19 - and how we helped Mike
March
31st - Rising to the coronavirus challenge
24th - Keep connecting - in a different way
13th - Demonstrating our impact
February
4th - The Big C and grabbing life
4th - "Cancer wasn't meant to happen to us"
January
30th - My journey as a charity trustee
7th - Top 10 tips for CVs and interviews
2019
December
9th - Grief and loss at Christmas
November
7th - Charity trusteeship
6th - How counselling can help manage stress
October
9th - Living with anxiety and depression
July
10th - How coaching can help
May
16th - Changing attitudes to mental health
15th - The vicious circle of body image & mental health
14th - Social Anxiety & how we can help
April
11th - Life with Parkinson's
March
29th - What is Bipolar?
29th - The one about the Bipolar surveyor...
12th - Memory tips from the training front line
January
22nd - Losing a parent
8th - Frequently asked questions about LionHeart
2018
December
7th - LionHeart's support was a game-changer when I failed APC
August
16th - When the reality of motherhood doesn't quite go to plan
July
10th - The story behind surveying's Sisterhood Summit
2nd - The rollercoaster of being a first-time dad
June
22nd - My father's suicide and what I've learnt
14th - Tips for your RICS APC final assessment interview
7th - Trust in the charity sector
May
21st - Is it really okay to not be okay?
April
17th - Building resilience through your APC
January
8th - 7 ways to get more active this year
2017
December
4th - Coping with loss and grief at Christmas
October
5th - "I was told I might not be cut out to be a surveyor"
September
26th - Resilience, and why we need it
August
21st - APC Revision Top Ten Tips
July
12th - LionHeart on new fundraising code of practice
June
19th - Living with 'invisible' illness
14th - How LionHeart helped us live life
13th - Men's Health Week 2017
May
22nd - Living with panic attacks
18th - Why we must care about work life balance
11th - The chicken-and-egg of mental health and shame
February
2nd - What I learnt from Dry January
January
31st - "My 19-year journey to MRICS is what made me"
5th - Ways to be kind to yourself in 2017
2016
September
7th - Suicide prevention
August
1st - Coping with APC stress
July
13th - "I constantly watch my husband for suicidal signs"
May
26th - Dealing with referral at APC Final Assessment
19th - How mindfulness can help your relationships
18th - "I live, and thrive, with depression"
17th - Men and mental health
16th - Mental health and your relationship
April
26th - Starting out in surveying
March
11th - A happy retirement
February
1st - My Dry(ish) January
January
21st - Spring clean your finances
6th - When to consider couples counselling
2015
December
4th - Having a (financially) healthier Christmas
November
19th - Identifying and dealing with workplace bullying
18th - How to help a loved one with an addiction
June
15th - Reflections on the Lionheart Surveyors’ Football League season
12th - Carers
10th - How LionHeart can support carers
9th - Desktop Relaxation techniques
May
29th - Techniques to help combat anxiety
20th - Helping a family member with depression
18th - Achievements that make a difference
16th - Five things that may indicate your colleague needs help
11th - Helping during a panic attack