When the reality of motherhood doesn't quite go to plan 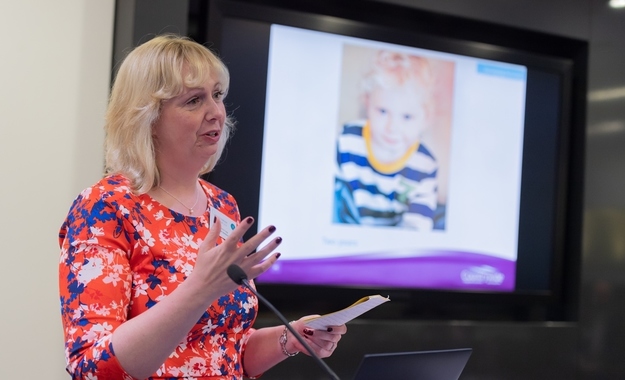 My story about depression begins, funnily enough, at a time in my life that you would expect to be one of the happiest.
In 2008, my husband and I learned we were expecting our much-wanted baby. I think you always have a kind of vision of your first baby, what motherhood and pregnancy will be like - but when that reality doesn’t quite go to plan it can be absolutely overwhelming.
For me, the reality definitely didn’t turn out like I’d imagined.
Being pregnant was really hard work, for a start. I found that being a residential surveyor and being heavily pregnant was not particularly compatible!
Eventually our baby Thomas arrived unexpectedly a month early, weighing 5lb 1oz. He was blue and struggling to breathe and was whisked away from us into SCBU. We were told he had a congenital defect of the throat and needed emergency surgery. To us, this was completely out of the blue, it was nothing that had been picked up on the scans, and it was all such a shock.
Our tiny baby spent several hours in surgery and was then placed on a ventilator, intentionally paralysed by doctors to allow his little body to heal. We spent the majority of his first seven months in hospital and there were many ups and downs. Sometimes he would suddenly stop breathing. I had to resuscitate him on several occasions and so it was backwards and forwards for stays in hospital.
“That rollercoaster of emotions changes you as a person”
I’d had it all planned out: I was taking maternity leave and going back to work after six months. As it turned out, he still wasn’t breathing properly by then and was prone to infection and I felt I just couldn’t leave him. Instead of being my normal organised self I remember asking the ward sister for a piece of paper and wrote a hastily scribbled note to my bosses telling them I wanted to extend my maternity leave - it was just so unlike the super-organised way I had always worked and lived my life!
I think many parents feel those emotions to a certain extent: if you’ve been the type of person who has always been in control, very professional, when you become a parent you often feel like that goes out of the window! Even if your baby is completely well and doesn’t have any additional needs, that learning curve can be a hard thing to conquer.
That rollercoaster of emotions changes you as a person. I had been surviving on adrenaline through Thomas’s first months and then a period of depression set in. The guilt I felt about this was just incredible. I mean, I was so lucky to have this amazing child who had survived but I just couldn’t get over what we had been through.
Thomas was nine months old when I was diagnosed with depression. I kept going, I had some medication and I had some therapy: I sort of muddled through.
Perhaps if I’d had more help in the early days and really got to grips with my depression I might not have got so bad later on - but when Thomas was five and a half I had a breakdown. 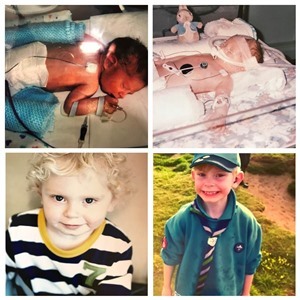 One Sunday night I just kind of broke, and said I can’t do this. I stopped functioning - I couldn’t brush my hair, put on my shoes, I was in a deep dark uncomfortable place and these feelings of utter depression were completely new to me.
I had tablets to help me wake up, tablets to help me sleep.  Thankfully through a combination of medication and therapy, I did start to get better. I took three months out of the workplace, got some rest and, maybe, some perspective.
“Great things can come from rotten times”
I was never a danger to myself or others. I didn’t want to do the everyday things, but I never wanted to not be here. Because of Thomas, I so badly wanted to get better - I just couldn’t find a way to do it to start with.
I feel very lucky to say today, I got better - and I did it for him.
Thomas is now a happy 9-year-old, an absolute joy. Throughout his life, there have been lots of surgery, lots of medication, lots of time in hospital and at clinics. All this does mean he has ongoing health and developmental issues: hearing problems, ADHD and dyslexia.
I don’t think I will ever get over what happened after Thomas was born. I truly feel that experience damaged me, and I don’t think I will ever be the same person. And yet, that is not necessarily a bad thing: I have a more open mind, compassion and empathy, areas of strength I never knew were possible because of that experience.
As a family we’ve come through it remarkably well. I don’t regret anything and I certainly wouldn’t change Thomas or his character; he is a very special, amazing little boy who hopefully has a great future ahead.
Ultimately, I think great things can come from rotten times: I don’t think I would have pushed forward a wellbeing programme at work, or partnered with LionHeart or become a mental health ambassador.
I want to help break down those barriers and make it possible for other people with mental health problems to be able to say, I got better too.
To anyone who is struggling right now, I’d say, you think this is how it’s going to be forever, but it isn’t. Life moves on and things change.
To those new mums I’d say enjoy it for what you can at the time, because it goes so fast - but don’t feel bad if you’re exhausted or “not perfect”. Try to be brave enough to talk or ask for help, because you’re definitely not alone and other people will have felt this way too.
Caroline Legg MRICS is a RICS registered valuer and APC assessor. She is a mental health ambassador for LionHeart and, after sharing her story in public for the first time at the London John O’Halloran Symposium, she became a LionHeart trustee in order to support our work in this area even more.
Find out more:

2021
May
20th - Coaching for change
12th - “I’d hit absolute bottom – but it was the catalyst to seek help”
April
22nd - Spring into action by fundraising for LionHeart
March
4th - Reflecting on university mental health
February
15th - My experiences of counselling
January
20th - Worry Time - and how it helps
18th - My furlough & redundancy journey
13th - Volunteering and LionHeart
2020
November
30th - A road to change
2nd - Trusteeship through lockdown and uncertainty
October
12th - The importance of legacies
10th - Overwhelm - and overcoming it
8th - Lockdown and my mental health
September
28th - Creativity at Work
July
20th - Video
June
24th - 'If I can do it, so can you'
22nd - How to ace your APC interview online
8th - Help! I've been referred... what now?
3rd - Your coronavirus concerns, and how we're helping
May
12th - Managing health anxiety through Covid-19 - and how we helped Mike
12th - How coronavirus might be affecting your mental health
March
31st - Rising to the coronavirus challenge
24th - Keep connecting - in a different way
13th - Demonstrating our impact
February
4th - The Big C and grabbing life
4th - "Cancer wasn't meant to happen to us"
January
30th - My journey as a charity trustee
7th - Top 10 tips for CVs and interviews
2019
December
9th - Grief and loss at Christmas
November
7th - Charity trusteeship
6th - How counselling can help manage stress
October
9th - Living with anxiety and depression
July
10th - How coaching can help
May
16th - Changing attitudes to mental health
15th - The vicious circle of body image & mental health
14th - Social Anxiety & how we can help
April
11th - Life with Parkinson's
March
29th - What is Bipolar?
29th - The one about the Bipolar surveyor...
12th - Memory tips from the training front line
January
22nd - Losing a parent
8th - Frequently asked questions about LionHeart
2018
December
7th - LionHeart's support was a game-changer when I failed APC
August
16th - When the reality of motherhood doesn't quite go to plan
July
10th - The story behind surveying's Sisterhood Summit
2nd - The rollercoaster of being a first-time dad
June
22nd - My father's suicide and what I've learnt
14th - Tips for your RICS APC final assessment interview
7th - Trust in the charity sector
May
21st - Is it really okay to not be okay?
April
17th - Building resilience through your APC
January
8th - 7 ways to get more active this year
2017
December
4th - Coping with loss and grief at Christmas
October
5th - "I was told I might not be cut out to be a surveyor"
September
26th - Resilience, and why we need it
August
21st - APC Revision Top Ten Tips
July
12th - LionHeart on new fundraising code of practice
June
19th - Living with 'invisible' illness
14th - How LionHeart helped us live life
13th - Men's Health Week 2017
May
22nd - Living with panic attacks
18th - Why we must care about work life balance
11th - The chicken-and-egg of mental health and shame
February
2nd - What I learnt from Dry January
January
31st - "My 19-year journey to MRICS is what made me"
5th - Ways to be kind to yourself in 2017
2016
September
7th - Suicide prevention
August
1st - Coping with APC stress
July
13th - "I constantly watch my husband for suicidal signs"
May
26th - Dealing with referral at APC Final Assessment
19th - How mindfulness can help your relationships
18th - "I live, and thrive, with depression"
17th - Men and mental health
16th - Mental health and your relationship
April
26th - Starting out in surveying
March
11th - A happy retirement
February
1st - My Dry(ish) January
January
21st - Spring clean your finances
6th - When to consider couples counselling
2015
December
4th - Having a (financially) healthier Christmas
November
19th - Identifying and dealing with workplace bullying
18th - How to help a loved one with an addiction
June
15th - Reflections on the Lionheart Surveyors’ Football League season
12th - Carers
10th - How LionHeart can support carers
9th - Desktop Relaxation techniques
May
29th - Techniques to help combat anxiety
20th - Helping a family member with depression
18th - Achievements that make a difference
16th - Five things that may indicate your colleague needs help
11th - Helping during a panic attack