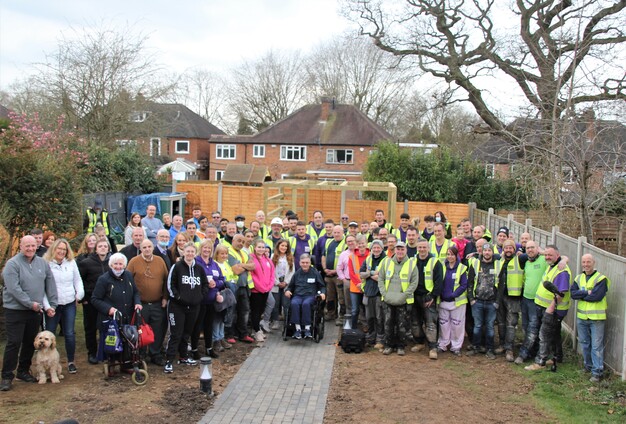 LionHeart has contributed to a mass charity effort to get a paralysed quantity surveyor home, months after a freak accident left him in a wheelchair.

Widowed dad-of-four Rob Lamb, aged 58, suffered a severe spinal cord injury in October when low blood pressure caused him to faint and fall, leaving him paralysed from the chest down. After undergoing surgery in hospital, Rob was transferred to a rehabilitation centre, and it was clear extensive adaptations would be needed to his Solihull home before he could return.

National construction charity Band of Builders stepped in with an army of trades volunteers to make the changes needed to make Rob’s home safe, comfortable and accessible, while LionHeart gave a grant to pay for some of the appliances in his specially adapted kitchen.

After months of planning, the volunteers descended on the family home, where Rob lives with his three sons, for a nine-day DIY SOS style makeover this month.

A total of around 60 tradespeople carried out a raft of changes including the creation of a downstairs bedroom and wet room complete with specialist equipment, an accessible kitchen, and new decking in the garden so he can access it. The team also installed air conditioning and underfloor heating as Rob’s body will now struggle to regulate its own temperature.

Rob, who was widowed when wife Julie died suddenly in 2017, lives with sons Callum, Gavin and Mackenzie. He returned on Sunday for an emotional handover of his new ‘home’ with his three sons, who have all helped work on the house alongside Band of Builders - saying: “I’m speechless really. It’s all overwhelming.”

Band of Builders is a registered charity that helps members of the UK construction industry battling illness or injury through the completion of practical projects to make their lives easier, more accessible and safe for people living outside the norm. Volunteers give up their time for free to work on projects, while materials are donated by companies across the construction industry, including big names like DeWalt and Jewson.

A state-of-the-art accessible kitchen was donated by Magnet while LionHeart’s grant covered the cost of accessible appliances. Covid testing kits and PPE were also donated for all volunteers on site, while many more companies made contributions to a project worth around £60,000 in total.

Craig Cashmore, who led the project alongside fellow volunteer project lead Tim Winch, said: “This is the biggest project Band of Builders has undertaken to date, and we’ve had extra challenges this time around with aspects like having to keep the site COVID secure and testing everyone involved regularly during the project. But seeing Rob’s face and the fact he can return home and be with his family after months apart is something you can’t put a price on.”

Bena Kansara, LionHeart’s support services manager, said: "We were very pleased to be able to play a part in helping get Rob home to an environment that will be safe for him, and one where he can begin to rebuild his life with his family. We’ve followed the progress of the amazing volunteers from Band of Builders with interest. It's a story that has really touched the team and we wish them all the very best for the future."