LionHeart is working with a networking and support group set up exclusively for gay, lesbian, bisexual and transgender people working within the real estate sector.

The LGBT community in the property and real estate sectors has generally kept a low profile, often because of the fear of attracting homophobic bullying or limiting their careers in some way.

But a desire to make the industry more diverse and inclusive led to the creation of networking forum Freehold. Since its launch in September 2011, the group has grown to around 800 members and includes building surveyors, valuation surveyors, agency surveyors, asset managers, architects, developers and property lawyers from both the public and private sector. 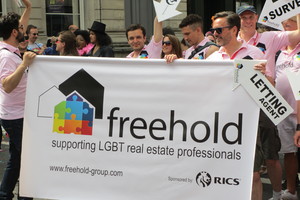 With the backing of national LGBT charity Stonewall, the aim of Freehold is to start addressing the equality gap for the LGBT community in the property sector, which is said to lag behind other industries in tackling sexual orientation issues and promoting equality.

A spokesman for the group said: “Evidence has demonstrated that people perform better when they are encouraged to be themselves, and Freehold is there to provide support so that members of the group can feel empowered to do just that.”

The group hosts regular events that bring the LGBT community together to share concerns and issues, as well as to explore business opportunities in an informal environment. It also offers a mentoring scheme to provide support for professional and personal development.

The RICS sponsored Freehold's entry in Pride in London in 2015, and Freehold was delighted to work alongside the organisation as part of the Inclusive Employer Quality Mark and Changing the Face of Property initiatives.