LionHeart's support was a game-changer when I failed APC 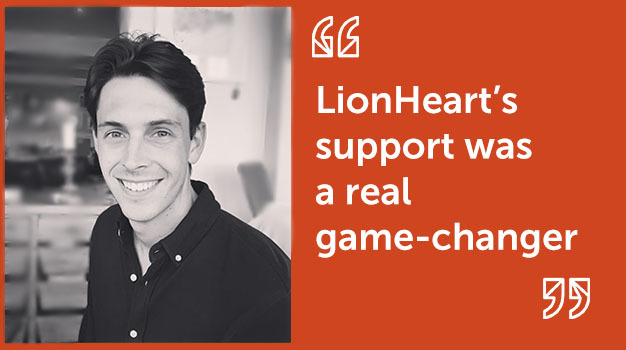 When I was referred at my first attempt at my APC final assessment in May 2017, it really hit me hard.

I was going through a really tough period, feeling extremely low and emotional, and felt I’d lost all confidence in what I was doing. In fact, I was on the verge of giving it all up and looking to change career paths.

I’d heard about LionHeart through the RICS website. The catalyst for calling really was being so close to walking away from everything I’d been working towards; it felt like one last shot.

The support I received from LionHeart was a real game-changer.

One lunchtime I rang and had a conversation with Ben Halpin [LionHeart support officer]. We initially chatted about my APC interview and lengthy referral report, both of which had hit me hard mentally. I’d been struggling to deal with what I interpreted as failure, and the immense pressure I had put on myself in the run-up to succeed.

Ben spent time listening to me and later sent me a book on stress management which we worked through over the next few weeks. It really helped me put my worries into perspective, so I could plan a way forward.

The book referred to stress as a bridge - the greater the load you put on it, the greater the likelihood it’s going to buckle, crack and eventually fail. I’d never thought of it like that before, but it made me realise that I had an incredibly busy life outside of the pressures of work and preparing for my APC. I played national league hockey, which meant training commitments three times a week and a game at the weekend. I also played competitive golf at the weekend, and tennis mid-week during the winter.

It all made me seriously re-evaluate my commitments and I decided to stop playing hockey and tennis to reduce the load, so I could focus on my APC and get some much-needed downtime.

It was something of a ‘light bulb’ moment for me! I later had a final chat with Ben and talked through my strategy to move forward. I found him incredibly reassuring, and he really gave me the belief I could get back on the horse and succeed.

After the support from LionHeart, I felt like I’d regained the confidence and drive needed to move forward.  I went back through my referral report with my new APC supervisor and planned a clear strategy to succeed. With further experience and some structure to my training and revision, I was able to focus on one milestone at a time, which took the pressure off mentally and was, I believe, key in my success at APC Final Assessment in October this year.

I still can’t believe I have done it! I look back at where I’ve come from and feel a great sense of pride that I never gave up and achieved what I set out to do. To be able to say I am a member of RICS is a huge honour.

The journey had definitely had its ups and downs and moments of discovery along the way. One of those that sticks out for me is being diagnosed with dyslexia this spring, some months after my first referral. I’d struggled with reading and comprehension my entire life but during my childhood and university years it just never dawned on me there was a problem. The diagnosis took a while to sink in, but I found I was able to turn it into a positive - I remember saying to myself, I’ve achieved so much in my life so far with undiagnosed dyslexia, it’s not going to stop me now! I found some techniques to help improve my weaknesses in reading, which I could then implement in my APC revision.

If there are any other APC candidates out there who find themselves struggling, I’d say never be afraid to ask for support. It can be a very stressful process so having a good network is crucial. LionHeart was a channel for me to voice my worries which had been bottled up, and I can’t thank them enough for their support.

Callum McDougall MRICS is a surveyor based in north-west England.

2021
March
4th - Reflecting on university mental health
February
15th - My experiences of counselling
January
20th - Worry Time - and how it helps
18th - My furlough & redundancy journey
13th - Volunteering and LionHeart
2020
November
30th - A road to change
2nd - Trusteeship through lockdown and uncertainty
October
12th - The importance of legacies
10th - Overwhelm - and overcoming it
8th - Lockdown and my mental health
September
28th - Creativity at Work
July
20th - Video
June
24th - 'If I can do it, so can you'
22nd - How to ace your APC interview online
8th - Help! I've been referred... what now?
3rd - Your coronavirus concerns, and how we're helping
May
12th - Managing health anxiety through Covid-19 - and how we helped Mike
12th - How coronavirus might be affecting your mental health
March
31st - Rising to the coronavirus challenge
24th - Keep connecting - in a different way
13th - Demonstrating our impact
February
4th - The Big C and grabbing life
4th - "Cancer wasn't meant to happen to us"
January
30th - My journey as a charity trustee
7th - Top 10 tips for CVs and interviews
2019
December
9th - Grief and loss at Christmas
November
7th - Charity trusteeship
6th - How counselling can help manage stress
October
9th - Living with anxiety and depression
July
10th - How coaching can help
May
16th - Changing attitudes to mental health
15th - The vicious circle of body image & mental health
14th - Social Anxiety & how we can help
April
11th - Life with Parkinson's
March
29th - The one about the Bipolar surveyor...
29th - What is Bipolar?
12th - Memory tips from the training front line
January
22nd - Losing a parent
8th - Frequently asked questions about LionHeart
2018
December
7th - LionHeart's support was a game-changer when I failed APC
August
16th - When the reality of motherhood doesn't quite go to plan
July
10th - The story behind surveying's Sisterhood Summit
2nd - The rollercoaster of being a first-time dad
June
22nd - My father's suicide and what I've learnt
14th - Tips for your RICS APC final assessment interview
7th - Trust in the charity sector
May
21st - Is it really okay to not be okay?
April
17th - Building resilience through your APC
January
8th - 7 ways to get more active this year
2017
December
4th - Coping with loss and grief at Christmas
October
5th - "I was told I might not be cut out to be a surveyor"
September
26th - Resilience, and why we need it
August
21st - APC Revision Top Ten Tips
July
12th - LionHeart on new fundraising code of practice
June
19th - Living with 'invisible' illness
14th - How LionHeart helped us live life
13th - Men's Health Week 2017
May
22nd - Living with panic attacks
18th - Why we must care about work life balance
11th - The chicken-and-egg of mental health and shame
February
2nd - What I learnt from Dry January
January
31st - "My 19-year journey to MRICS is what made me"
5th - Ways to be kind to yourself in 2017
2016
September
7th - Suicide prevention
August
1st - Coping with APC stress
July
13th - "I constantly watch my husband for suicidal signs"
May
26th - Dealing with referral at APC Final Assessment
19th - How mindfulness can help your relationships
18th - "I live, and thrive, with depression"
17th - Men and mental health
16th - Mental health and your relationship
April
26th - Starting out in surveying
March
11th - A happy retirement
February
1st - My Dry(ish) January
January
21st - Spring clean your finances
6th - When to consider couples counselling
2015
December
4th - Having a (financially) healthier Christmas
November
19th - Identifying and dealing with workplace bullying
18th - How to help a loved one with an addiction
June
15th - Reflections on the Lionheart Surveyors’ Football League season
12th - Carers
10th - How LionHeart can support carers
9th - Desktop Relaxation techniques
May
29th - Techniques to help combat anxiety
20th - Helping a family member with depression
18th - Achievements that make a difference
16th - Five things that may indicate your colleague needs help
11th - Helping during a panic attack